Cryptocurrency has made a number of profits for the holders, and it attracts hacker to mine for the money in the past time. These days, a report revealed that hackers use the clipboard to change the users’ bitcoin addresses and replace the address with their own to get the cryptocurrency.

How does the attacker steal money with the Clipboard Hijacker Malware? To send cryptocurrency, users should use a flexible address to finish the transfer. As a result, most of them are likely to paste their addresses to the clipboard for convenient use. However, hackers just recognize this custom and plant the malware on users’ computer, which monitors the Windows clipboard for cryptocurrency addresses. Once an address is detected, the malware will replace it with an address that they control. Unless a user double-checks the address after they paste it, the sent coins will go to an address under the attackers control instead of the intended recipient.

How to prevent Clipboard Hijacker Malware

Due to the complexity of discovering the changed address, users may not check the security manually every time. In this situation, a malware blocker is necessary. You can try IObit Malware Fighter 6 for the protection. It will block all possible threats and remind you once malware is detected. 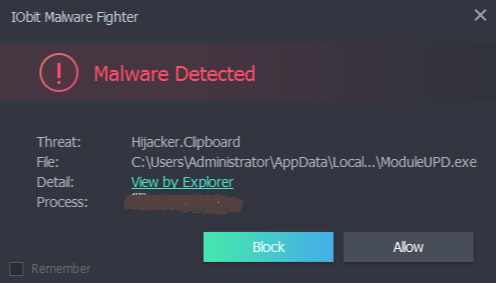 Days ago, a report said that Microsoft's Windows Defender blocked more than 80,000 instances of several new variants of the Dofoil (aka Smoke Loader) downloader. Microsoft acclaimed that they discover the malware because of the wrong location during the attacking process so that they can block the threat in time.

Dofoil Trojan includes a resource-draining cryptocurrency-mining payload. It connects to a remote site and downloads and executes arbitrary files, which can also download and run other malware. To prevent Dofoil coin mining attack, you need to ensure your Windows Defender Security is up-to-date. Moreover, IObit Malware Fighter 6 can also block the malware automatically. 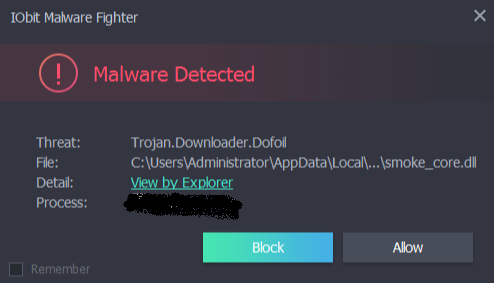 Besides the cryptomining malware mentioned above, there was another cryptocurrency miner named Adylkuzz reported after Wannacry attack last year. It was diagnosed to have the same way of infecting the computers with Wannacry, which used the EternalBlue exploit to rapidly propagate the malware over corporate LANs and wireless networks. Statistics showed the influence of Adylkuzz would be worse than Wannacry because it shut down SMB networking to prevent further infections with other malware.

Wannacry attack was blocked mainly through Windows Firewall, 445 port settings, Windows Patch update and SMBV1 closure. However, IObit Malware Fighter 6 is needed to block Adylkuzz cryptomining malware since Adylkuzz shut down SMB networking. So you may fail to prevent the attack only through Windows settings. 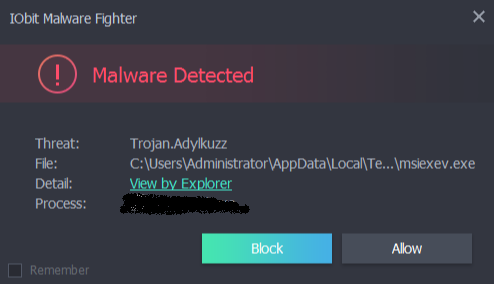